Lake Forest resident was a "sportsman" who took and interest in flying and took lessons from Glenn Curtiss and purchased a Curtiss Model E Flying Boat. Like many wealthy Chicagoans, Vilas escaped the summer heat on Trout Lake near Boulder Junction, Wisconsin. Not wanting to miss flying during the summer, he shipped his plane by train. At the time, few people in northern Wisconsin had seen an airplane.

Vilas realized the plane was more effective at spotting forest fires than the observation towers. He demonstrated his idea by taking Wisconsin's Chief Forester, Edward Griffith, for a flight on June 29. Griffith was so impressed by the visibility at 1,600 feet that the Wisconsin State Board of Forestry (now the Wisconsin Conservation Commission) to appoint Vilas the "Official Aviator." 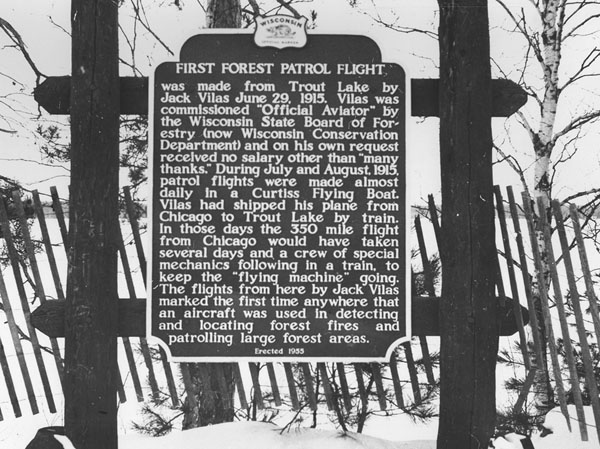 During July and August, Vilas flew daily flights to spot fires, but refused to accept any pay for his service. Of course, there were no radios in planes, so to report a fire he had to land on Trout Lake and send a message to the Forest Board.

The program was so successful, that an article about aerial fire spotting, called the "Wisconsin Plan," appeared in the September 1915 issue of American Forestry magazine. By 1917, many states were implementing the Wisconsin Plan. In 1919, the U.S. Forest Service worked with the Army Air Service to provide aerial patrols over national forests.

Over the years, use of airplanes by state and federal forest services was an on-again-off-again proposition as budgets varied and philosophies differed. Today, there is no question that aviation plays an essential role in both observing and combating forest fires. We all owe a debt of gratitude to the Chicagoan with foresight 104 years ago.