At first, I was reluctant to review Aviation Chicago Timeline because I thought that the more than one thousand entries would read like a long list of rambling and disconnected people, places, and things. I was pleasantly surprised, however, to see that the parade of events holds together, offering a comprehensive overview of the vital role Chicago played in aviation history.
This 450-page tome is a reference book, a chronology searchable by date or through a comprehensive index. It provides definitive information about how the Windy City took to the skies, influenced the city’s growth and development, and how it was and continues to be a center of aviation innovation, advancement, and business success.
In addition to being a reference book, Aviation Chicago Timeline is also a good read. One could read it cover to cover without getting bored or bogged down. The book addresses inventors, promoters, manufacturers, airlines, and professional organizations, and it doesn’t stop there. In addition, there are a galaxy of fascinating things that fly, from hot air balloons to blimps, rockets to drones, and bi-planes to jumbo jets.
Readers will learn a wealth of information about women in space, inflight refueling, and cockpit voice recorders. They will also read about crashes, spy planes, and preparations for war. Closer to home, readers will learn about local unions, airport restaurants, Midway and O’Hare airports building and expansion, security measures, and Italo Balbo, who recently hit the headlines when the name of Chicago’s Balbo Street was almost changed.
Many of the entries list detailed events, but you never know when one will strike a chord. For example, I was surprised to learn that Chicago once touted the tiny Ravenswood Airport, at Ravenswood and Touhy avenues, from 1928 to 1962. It was also fascinating to learn how the city of Chicago was able to annex that thin strip of land—on which the little airport sat and that connected it to O’Hare Airport—by giving Rosemont a 45-inch-diameter water main to carry precious Lake Michigan water to that suburb.
In the introduction, Haupt notes more than half a dozen other books about Chicago aviation and asks, “Why another book?” He answers that question correctly by saying that Aviation Chicago Timeline would “piece together the rich tapestry of Chicago’s aviation history.” The book admirably succeeds in doing so. The author also solicits feedback by stating: “If you see something, say something.” He even promises to publish corrections online at www.aviation-chicago.com before the next edition of this book is printed. In that spirit, I offer a few suggestions.
Please add a glossary. Acronyms pile up and most are not spelled out, except in first references, which are often pages or chapters earlier. And please add images and maps, which would liven
up this book. Also, please lengthen entries that are the most germane and shorten those that are marginal to the main topic, such as entries about the Beatles, da Bears, public housing, Lenny Bruce’s arrest for obscenity, etc. That said, some entries that might initially appear peripheral end up being germane. For example, an entry about the beginning of Prohibition seems marginal until one reads that airplanes became a preferred means of smuggling hooch into Chicagoland. As one bootlegger put it, “An airplane costs less than a good speedboat.”
Finally, for the next printed edition, please put the page numbers and dates on the outside edges of the pages rather than buried in the gutter margin and close to the binding, which renders them difficult to use.
I spotted very few errors in this authoritative work. Chicago’s first elevated train could not have “begun operation between Congress Parkway and Wabash Avenue” (as stated on page 5) because those two streets run perpendicular to each other. A look in the lengthy and laudable end notes credits the Chicago Architecture Foundation Member Magazine with this information. There are better sources, including The “L”—The Development of Chicago’s Rapid Transit System, 1888-1932, by Bruce Moffat.
In any event, the exhaustive end notes and bibliography are commendable and bear witness to the author’s meticulous attention to detail.
No one will appreciate or remember all the many facts and figures, names and dates, found in this book. But readers will come away with a keen sense of what it took to put wings on men and why Chicago can correctly claim the moniker of an “aviation capital.”

You can also read this review on the CWA site.

Greg Borzo is a prolific writer about Chicago's history as well as a docent and tour leader for Chicago History Museum.  Find out more about Greg's books and tours on his web site:  http://gregborzo.com/ 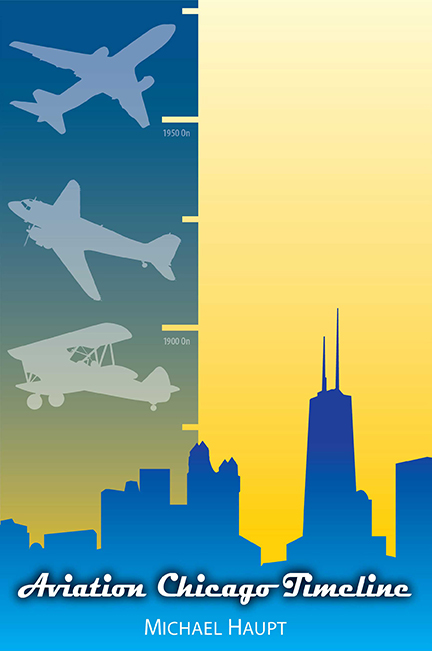