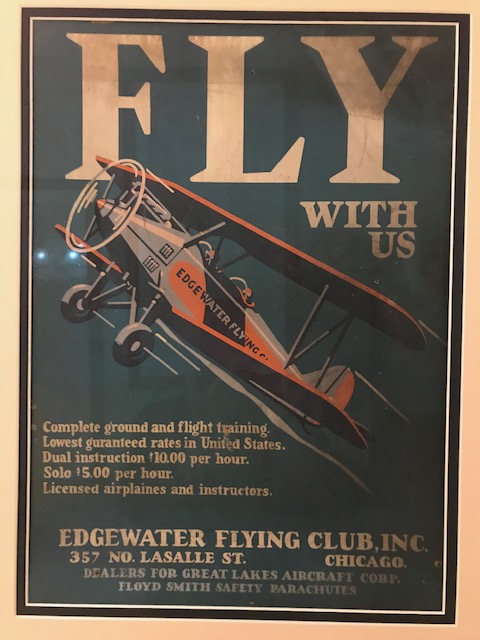 At the time, flying clubs were a new approach to aircraft ownership. By 1932, Edgewater ads proclaimed them to be “America’s first cooperative Air University.” Because the club had no bond issues or stock on which to pay dividends, all profits were reinvested either purchasing additional equipment or reducing flying rates.

Like most flying schools of the period, Edgewater Flying Club had offices, classrooms, and workshops downtown at 357 N. LaSalle. They offered both day and evening classes for the convenience of their students.

Flight lessons were done at a number of flying fields around the area. An ad in September 1930 indicates they flew out of Elmhurst Airport. A year later, an ad describes their use of two airports. Flying from Chicago Municipal (at 5250 W. 63rd) provided the student the opportunity to observe and fly in a busy airport with a wide variety of aircraft and operations. Less experienced students flew out of Harlem airport which was easier and safer because students were not competing with Muni’s traffic.

Club Membership Fee was $150. Rates for flight instruction were $10/hr. solo or $20/hr. dual instruction. Including the Membership Fee, the Club’s ads estimated license costs to be $300 for the Private Pilot, $550 for the Limited Commercial, and $1500 for the Transport Pilot.

Another advantage for members of Edgewater Flying Club was the ability to purchase an airplane at a substantial discount. As the poster shows, Edgewater was a dealer for Great Lakes, a prominent biplane manufacturer.

The Club was also a dealer for Nicholas-Beazley airplanes out of Marshall, Mo. Nicholas-Beazley made two-place monoplanes that were advertised for their safety. The company claimed that not only was the plane spin-proof but that was able to right itself from any position with hands off the controls.

The poster also indicates the Club was a dealer for the Floyd Smith Safety Parachutes. The parachutes sold by Floyd Smith Aerial Equipment Co. in Chicago’s Loop, were the first free-fall parachutes in the world. Learn more about them in the entry “1918/07/27  First Unattached Parachute.”